Cleaning your pool will keep it safe and functional, but certain pool remodeling updates are also necessary to protect its appeal and value. As a homeowner, you may not know which updates are best for improving the look and value of this investment. Here are some great stylish ideas for updating your swimming pool.

Considering how much value outdoor living adds to your home, incorporating areas around the pool for enhanced entertainment will update your home’s look and family’s enjoyment. Adding a waterfall or sheer descent to your pool is a great option to enhance your outdoor living experience. The sound and sight of running water from your pool’s waterfall are peaceful and calming. Depending on the style of your home and outdoor area (natural vs modern), you can create a waterfall over natural stone and landscaping or a sheer descent or sheetfall for a clean, more modern look. While every homeowner has a different aesthetic, current trends are leaning towards that rustic and relaxing lagoon-like feel to their outdoor spaces.

Due to its durability and ease of maintenance, concrete was the top choice in pool construction for many years. However, adding a bit of style and creativity to your pool with the use of natural stone tiles and coping (the transition between the pool and your deck) is becoming a popular option today.

During the pool remodeling process, natural stone tile and coping will give your outdoor oasis a natural and rustic look. The use of stone and tiles in neutral colors will give your pool an earthy, natural look, especially when coupled with a unique waterfall.

As time goes on, a pool will eventually need to be replastered. General wear and tear will, over time, cause the plaster to deteriorate. If you don’t replaster your pool, it could lead to even bigger problems down the road. The good news is that replastering your pool can also give you a fresh and updated look.

We offer several designer options that are mixed with quartz or pebbles.  These plasters come in a variety of shades and vibrant colors to really give your pool a pop! The best part is that a quartz or stone blended plaster is actually more durable than the traditional plain white and comes with a much longer warranty.

When it is time to perfect your pool, opting for one or all of these updates will ensure you are making a smart investment. For repairs, restoration, or pool remodeling updates, contact Leak-Tech at 972.516.4995. 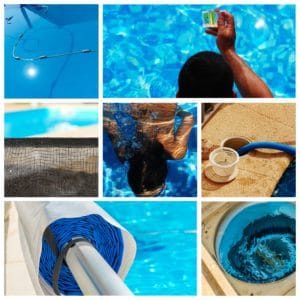 If you live in North Texas and you have an inground swimming pool, there’s a good chance that at some point in the life of your pool, it will develop an “invisible” pool leak.  This means your pool is leaking in a way that’s not immediately apparent to you, the homeowner.

It’s important to have a pool leak fixed as quickly as possible to save money on water and chemicals and to keep leaking water from causing further damage to the ground around the pool.  If you think you have a pool leak, here are the two common areas you’ll most likely find a problem.

Underground Pipe Cracks
The failure of underground pipes is fairly common in North Texas and accounts for about 30-40% of pool leaks in the area.  Poor installation, poor-quality materials, tree roots and overzealous digging around the pool can all contribute to an underground pipe crack that will cause your pool to lose water. The shifting of North Texas’ infamous clay soil is another common cause of underground pipes to crack and cause a leak.

Structural Cracks
Though not unique to Texas, pool leaks caused by shifting ground are more common in areas where the weather stays hot and dry for long periods of time.  The hot, dry conditions in North Texas’ summers cause the clay soil to shrink, move around and pull away from pool decks. This shifting ground can cause structural cracks and damage to your pool, resulting in a leak.  If the hot and dry period of the summer is followed by a period of heavy rain, the clay will then expand and shift even more. This can cause further damage to the structure of your pool. In addition to the shifting soil of North Texas, tree roots and faulty construction practices and materials can be another cause of structural damage to your pool.

If you notice that your water bills have skyrocketed, you find drips, puddles or dampness around your pool that shouldn’t be there or the ground around your pool has visibly shifted, call Leak-Tech at (972) 516-4995.  We can find your pool leak and repair it quickly and professionally.  Visit us online at www.leak-tech.com to learn more about our leak detection and repair services. 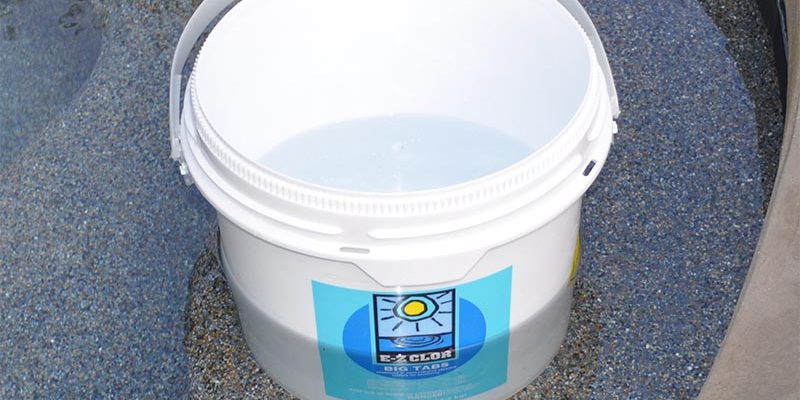 Evaporation is dependent on a variety of environmental and pool related conditions, (wind, water temp, dew point, barometric pressure, etc). Because of this, the evaporation rate can vary greatly from day to day and even pool to pool. Before becoming too concerned about a leak you can do this simple swimming pool leak test to determine if water loss in your swimming pool is due to a leak or is just evaporation. This simple test is called the bucket test. Basically, the bucket test exposes water in a bucket to the same conditions as those affecting your swimming pool. By comparing the water loss in each, it is possible to determine if the pool is leaking or if supposed leaks are just the result of evaporation. 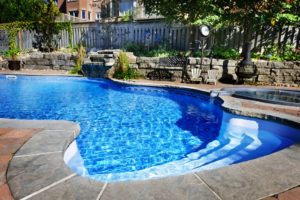 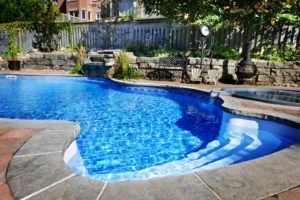 Seeing a crack in your pool can be alarming, so you need to get a professional opinion on whether pool crack repair needs to be done. Two types of cracks exist: structural and superficial. Structural cracks are more serious and often require fixing. Here is what you can expect a professional to do when fixing your pool crack:

Trust the repair of your pool in the hands of experience with the professionals at Leak-Tech. Call us today to schedule an appointment to assess your pool’s condition at (972) 516-4995 or visit us online at www.leak-tech.com

This time of year, we get many phone calls regarding leaks and evaporation. Many pool owners do not realize that water evaporates year round – even in the winter. And when owners don’t closely monitor their swimming pool water level, costly damage can occur.

There are three main causes of evaporation: heat, wind, and humidity. Everyone know that water evaporates more in the summer due to the extreme heat. However, the winter tends to bring a lower humidity level and higher winds. Both of those factors also contribute to evaporation. It is not uncommon to lose 1/8″-1/4″ in the “non-summer” months.  If you have a waterfall, fountain, sprays, or other features that bring water up in the air, your evaporation could be even higher. As always, we recommend the bucket test to monitor your swimming pool water level and to make sure you are actually losing water beyond evaporation. If you have any questions, please email or call us right away!

Don’t let the unusually warm December temperatures fool you – we will see a winter sometime in the next couple of months. When it comes, you want to be prepared. These basics of pool maintenance for the winter months will get you on your way. 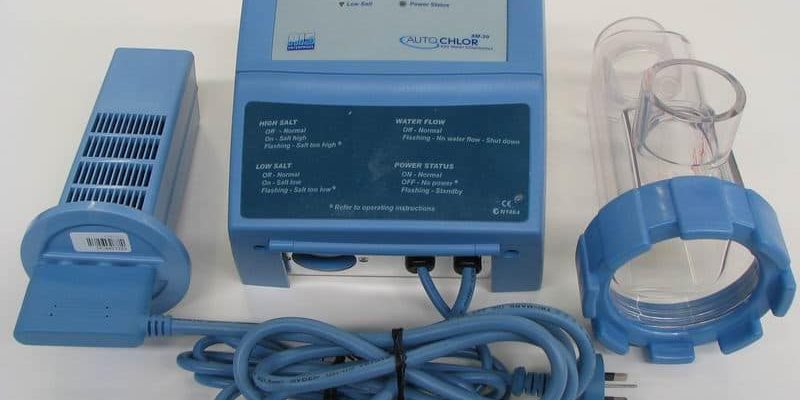 Five Reasons to Buy a Salt Water Chlorinator
Over recent years Salt Water Chlorination (SWC) has gained favor as a safe, reliable and economic method of disinfection. It is well suited to the treatment of swimming pools. While the initial cost may be a consideration, the lower operating cost and high level of safety means SWC is appropriate in many instances.

Saltwater chlorination is a process of sanitizing water, using chlorine that is produced in the pool water from ordinary salt. Developed in Australia over 30 years ago, the technology is utilized in over 90% of all residential pools in Australia today. The process occurs via electrolysis, using ordinary salt and a device called a saltwater chlorinator. Initially, a certain amount of salt is added to the water. As water passes over the chlorinator’s specially coated plates, an electric current breaks down the salt and water into their basic elements to form sodium hypochlorite, which is the active sanitizer in all forms of chlorine. The chlorine kills algae and bacteria in the water and oxidizes the waste. Thereafter, the chlorine regenerates itself back to salt and begins the process over again in a virtually unending cycle. Since salt does not evaporate, an occasional addition of salt is needed only to replace what is lost due to the splash out, pumping out, draining or backwashing.

Reason 1 – Economical
The obvious advantage is the cost effectiveness of the salt-water chlorination system. Imagine saving all the money you currently spend on Chlorine. The systems often pay for themselves in a year or so.
Aside from the initial start-up, salt is only added to replace what is lost due to splash out, backwashing, pump out or draining, making the additional salt expense very small.

Reason 2 – Safety
A salt-water chlorinator makes chlorine in the pool water, automatically and continuously, so you no longer have to buy, store or handle the dangerous chemical liquid chlorine. Personal injury risks associated with the storage of chlorine are eliminated, as are the other risks of potentially harmful situations where accidental contact with these dangerous chemicals by pool visitors or maintenance staff can occur.

Reason 3 – Swimmer Satisfaction
Our studies show that over 95% of swimmers prefer swimming in salt-water pools to any other type of sanitized pools. Salt has a softening effect, just like a water softener, so hair and skin feels soft and silky rather than dry and brittle as with packaged chlorine. The other very important factor is that when the water flows through the electrodes, the chloramines (“dead chlorine” that causes the strong chlorine smell and stinging eyes) are destroyed thus leaving the water in pristine condition.

Salt-water pools are popular because most people who consider themselves “sensitive” or “allergic” to chlorine are not actually reacting to the chlorine at all. This problem usually arises from use of packaged pool chemicals due to additives contained in those chemicals. The same swimmers, who claim allergic reactions to chlorine, typically experience no problems when they are in a salt-water pool. The answer isn’t the absence of chlorine. Salt systems generate their own chlorine on-site. The answer is the absence of all the packaged chemicals and by-products of those chemicals.

Reason 4 – Environmentally Friendly
Salt is a safe and naturally occurring element. A salt-water chlorinator recycles the salt over and over so there are no by-product wastes added to the environment. Due to high efficiency of the technologies used, on-site chlorine generation requires a far less energy consumption when compared to the commercial chlorine plants. Reduced handling of chlorine means less environmental damage due to accidental spillages.

Reason 5 – Reduced maintenance
The only maintenance required with salt-water pools, apart from maintaining water chemical balance is periodical cleaning of the cell electrodes. Some SWC systems come standard with ‘self-cleaning’ capabilities to further lessen the burden of maintenance. This means the chlorinator will reverse the polarity of the electrodes periodically in order to reduce the build up of calcium deposits on the cells. Keeping the cells clean will ensure the cells always perform at their peak.

Salt-water pools used to be the exception, now they are becoming a widely accepted method of water treatment in swimming pools. Majority of builders now make salt water systems standard on their new pools. When considering the opportunity to replace the outdated methods of dosing a pool with dangerous chemicals, the safety factors alone are enough reason to upgrade. Though, it is usually the realization that salt-water sanitation is by far the most economical method of pool sanitation that prompts owners to upgrade.